Ego is the Enemy

Personal reflections on the book by Ryan Holiday

Ego is the Enemy.

Personal reflections on the book by Ryan Holiday

Ego is a strange one to tackle and one that had been sitting on the backlog of articles to write. At face value, you're probably wondering a) why the title and b) is this relevant?

In one company, I wasn’t getting on with the Project Management Office. As far as they were concerned they already did the strategic partnering with the business functions, they already had the demand management mapped out and delivered. What was I there to do as the Head of Demand?

Having just turned down another offer to take on this role with mandate to deliver Demand Management, I found this was a frustrating position to be in. What was I to do? Do I compete? Compromise? Avoid, and set up office for my team in a corner of the company? Or give in, effectively becoming a lieutenant in their clique?

So these types of questions can be articulated with tools such as the Conflict Mode Instrument (link) in helping me understand my preference for dealing with such conflicts with other people. Tools aside, what about the more Machiavellian amongst us? Surely, I could play politics and try to out-manoeuvre these characters to establish my position?

Within me and unbeknownst to me are powerful forces at play that drive the way I act and feel, that happen on impulse without some fine plan. These more assuredly determines the outcome of any politics game. These forces help me make snap judgements on whether I like a person, whether I look up to someone or down on others. These forces are my ego. Who do I think I am? On what basis? Why? My self-respect and self esteem are fragile and I have a powerful urge to protect it. Do I pick up a perceived slight or off-hand comment on Facebook? What’s my first reaction? Make some clever passive-aggressive comment back? Show some mock humility?

Apparently Linkedin made it easier for us to access our homepage quicker based on the hypothesis that we want a vanity check before we research other people. How much of what I do is driven by the need for status? How much do I strive to collect the emblems of success, to prove I’ve made it? I would argue that the more career oriented we are the more ego-centric we are. As one of my colleagues put it, “it’s about respect”. In fact when I run workshops that identify the values of a team and how they work, “Respect” is always on the list as one of the values.

I’ve referenced the OK Corral (Ernst, 1971) in our Convergence Essentials® workshop (see the diagram below) to demonstrate how we treat each other. We judge other people with respect to how we view ourselves. I’ve highlighted the box in green as the space where both parties are “ok” – this is the space where actual 2-way communication can occur.  When we are in the other three different spaces, we chose to ignore, disrespect, patronise, condescend, be unassertive or submissive. No real dialogue exists – we’re either order takers or order givers. 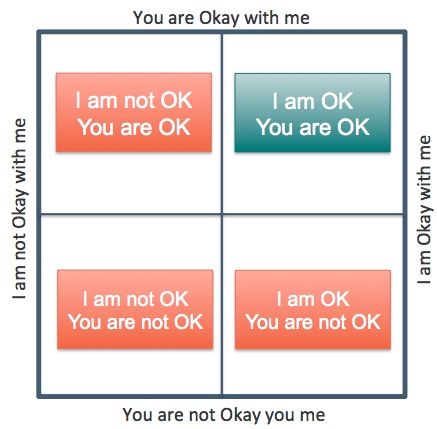 If we take one of Google’s definitions of politics as “activities aimed at improving someone's status or increasing power within an organization”, then we see how the way we act and behave towards another person can quickly change. For example: Do we subconsciously slip modes when we go from say a client meeting to a supplier meeting? Are we expecting patronage or showing respect? How ready are we to assert our position or cede ground purely on our perceived position in the hierarchy?

I suggest that ego is huge driver of organisation politics. We are complicit in contributing towards it whether we choose to engage or not -  and in fact as humans we’re wired subconsciously to react instinctively to political situations.

I’ve found getting to that point has meant battling with my own ego first, reflecting on my initial (desired) responses to situations and what would actually be seen as a better outcome not just for me but for the organisation within which I work.

So, as a final thought, I leave you with a quote from Ryan Holiday’s book:

“Be humble in our aspirations, gracious in our success, resilient in our failures.”

We discuss politics on our Convergence Essentials® workshop, provide some simple tools to diagnose the political environment and what actions to take. If you are interested in this, please click on the link.

The Inspiration, The Sell And The Implementation